Any parent is welcomed to join the committee and help out with fund raising activities that help provide new equipment for the young people to enjoy and to help maintain the hall. Please contact me if you are able to spare a small amount of your time.
Jeremy Ensor
Chairman

Andy Honour reports on Columbus Explorer Scout Unit’s summer trip to the coast:
Skern Lodge is an adventure centre on the north Devon coast. We have visited a number of times before, but this year it felt like the fullest programme we have ever had.
It started Sunday afternoon with surfing. The wind was in shore and making loads of great waves for us amateurs to ride. We took the largest group ever, there were 18 of us and everyone stood up on their board even if only for a brief moment.
That evening we did the tunnels. This was something we have not had as an evening activity before, so day one already felt full. The tunnels system is claustrophobic and designed to test our courage. Everyone got stuck in and tested themselves, some going into spaces they had not previously managed.
After a good night’s sleep and cooked breakfast Monday morning was river Kayak and bridge jump. There was a great sweep of confidence as everyone jumped the bridge three times with barely any hesitation; of course there were plenty of screams. 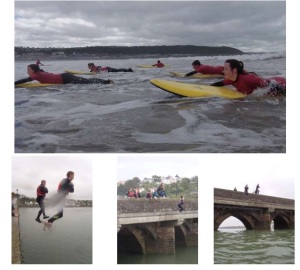 We had the two man sit on Kayaks, great fun to paddle, but we also spent plenty of time falling or jumping off of them as well. The slalom race between the bridge arches demonstrated a wide range of skills with plenty of action between the boats.
The afternoon event was high ropes. There are many events on the high rope and we seemed to get through so many events including our old favourites of crate stacking and the trapeze. We also did the scramble net the low and high bar and the caterpillar climb.
In the evening we had team building games. Brad our instructor worked really hard to find us a ton of entertaining stuff to do. An old favourite game, Place the Egg, gave us all plenty to think and laugh about. The Zen wrestling games were also new to us and great fun. We finished the evening with six man ski racing, where the leaders team demonstrated terrible coordination.
Tuesday was our last day and we were back in wetsuits and down on the river in inflatable rafts. The activities included some paddling but with the usual silliness, boarding other boats and generally messing about. A new game with the rafts was to slide from the bank. So much fun from such a simple game.
The last activities were the climbing and abseil wall and the zip wire. Alex and Ali provided us with great entertainment pulling everyone up to the top of the zip wire. After the all-important team photo it was time to say another fond farewell to Skern until next time.

On Saturday of the August Bank Holiday weekend six Griffin scouts joined another six from 7th Malvern to camp at Rough Close just outside Coventry.
We pitched camp on a fine afternoon and the sunshine continued as the Scouts took part in shooting and archery on Sunday, but in true Bank Holiday fashion the remains of Hurricane Cristobal dropped in on Monday. By 6pm a new stream had appeared and the Wombat patrol’s tent was hastily moved as the stream headed straight for it. Fortunately we were able to obtain the key to a small hut and the heaters were soon hard at work drying wet clothes.
Having spent Tuesday preparing, the whole camp set off for a day’s hiking on Wednesday, well almost. Having dropped the day hikers I returned to camp to find that the Warden (who was in sole possession of the codes for the locks) had left site, marooning the overnight hikers in the car park. They quickly transferred to the minibus and we set off for their drop point somewhat later than planned. I returned and met up for lunch with day hikers just in time to hear the scouts singing “One pound beef” to a herd of bullocks (from the safety of the other side of a gate).
Thursday found us (and a layer of mud from the campsite) in the swimming pool in Coventry, before the (now clean) scouts went shopping to buy ingredients for the meals that they had planned for the next 24 hours. Back to camp for some tasty and creative meals, with extra points for the week long patrol competition on offer and the scores neck and neck, the scouts were eager to find ways to impress the leaders.
Friday night is ‘bivvy’ night with the scouts sleeping out in shelters that they build in the woods around camp, with Monday night’s downpour on everyone’s minds and more rain in the forecast, the shelters were constructed with great care.
When the final scores were added up on Saturday the patrol competition had been won (by the narrowest of margins) by the Malvern Eagle patrol.
Mark Firth